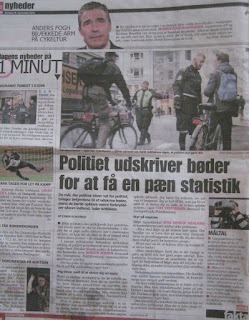 It's something we read regularly in the Danish press. The police had out traffic fines in order to make their statistics look good and to reach certain goals set for each police district. The article, above, is from November, 2011, but there are articles about it every year. The photo in the article is police handing out fines to bicycle users in Copenhagen. Cyclists are often the easiest target. You park your police car or police bicycle (illegally) on a busy street and starting writing fines.

It is often near the end of the year that police - if it looks like they're lagging behind in reaching the goal - will hit the streets to hand out of flurry of fines.

The article highlights the irony that in many police districts they become so focused on traffic fines that they use less time on crime.

Jørgen Jensen, a policeman from the western suburbs, is quoted in the article as saying, "Based on the bare figures, we go after certain areas in order to reach the targets."

Tom Steffensen, a policeman from Northern Sjælland, says, "If we want to prevent break-ins in suburban neighbourhoods but, at the same time, have to hand out traffic fines, then neither job will get done properly. Officers often say to citizens 'I'm sorry, but I have to write you a ticket so we can reach our targets.'"

At the beginning of each year, the 12 police chiefs sign a 'contract' with the national police chief about which goals must be reached in various areas over the course of the year. The police chiefs get a bonus at the end of the year for their district if the goals are reached.

This is a timely post because the police have announced - yes, they always announce it - that next week they'll be going after cyclists in Copenhagen, as the Danish paper Politiken wrote yesterday.

So. I found this app from Trapster.com. It's an app for motorists where they can warn each other about speed traps or other bothersome hindrances.

I've downloaded it to my smartphone and I was thinking it would be a great way for the bicycle users of Copenhagen to warn each about these police traps for cyclists next week - and every time. This applies to any cyclists anywhere - it would be brilliant in the Netherlands, as well.

I've emailed Trapster to ask them to include bicycle pictograms for their 'trapmap' - but haven't heard back yet. "Damn cyclists", they're probably thinking. But hey. The app works well and we could use it as is. If you are cycling in your city and see police pulling over cyclists, you go onto the app and report the location. It 'pushes' out to other users who have their app activated on their journey and warns them.

We'll also be using this hashtag for Danish cyclist traps: #cykelrazzia. Oh dear... should I start a Facebook group, too?