My City Sucks and it's Great

When I am doing keynotes or interviews I describe the mainstream aspect of our bicycle culture as being nothing more than Vaccuum Cleaner culture. Like bikes, we all have one, we all use it but they are just tools to make our daily life easier. No fetishizing, no naming of inanimate objects, no vaccum cleaning clothes. 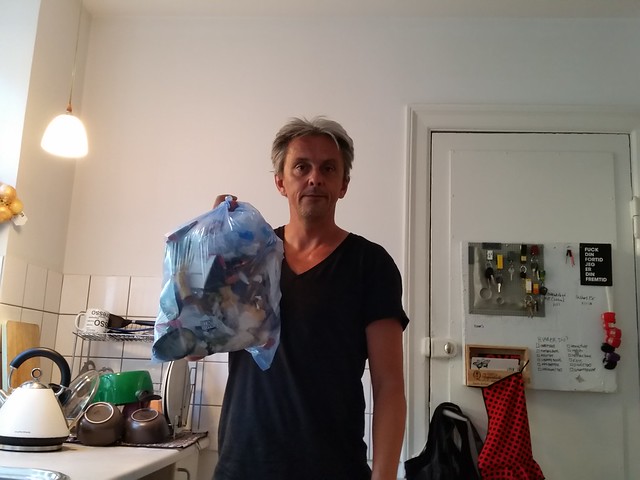 I enlisted The Lulu to show how we get rid of our household garbage. Because it's pretty cool. Firstly, as The Lulu's photo clearly demonstrates, we use small bags for daily waste. Nothing bigger than this will do. 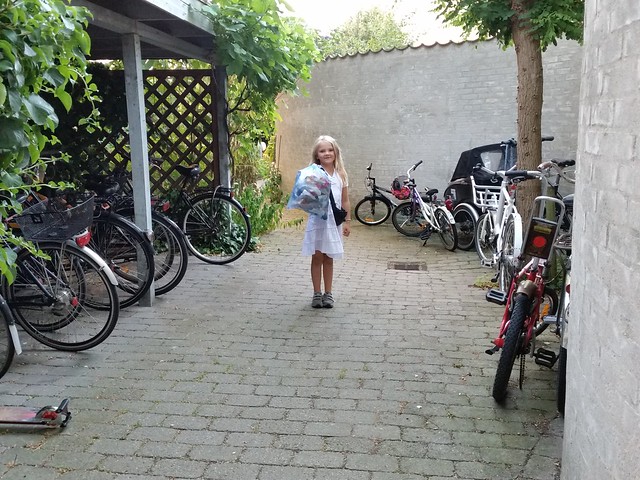 When we chuck our garbage, we do it in the morning, as we head for school and work. We pass one of the four bike sheds in our backyard. 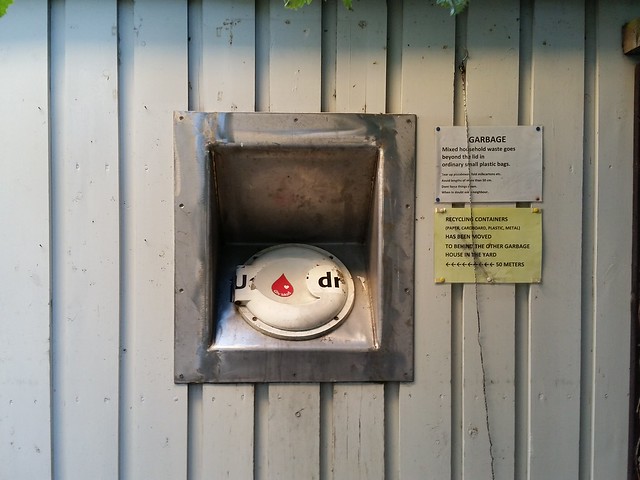 We end up at this little building - there are two of them in the backyard - with this round chute. That's why we have to use small bags - the chute just ain't big enough for bigger bags. 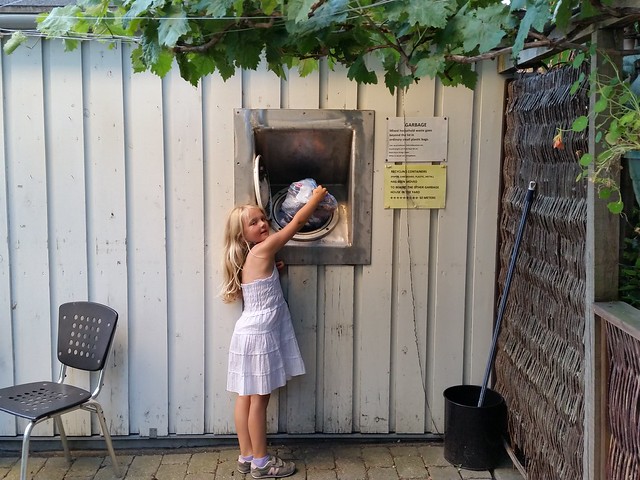 Open chute and insert bag. Boom, baby. The bag slides down into an underground container and that is the last we see of it. But that's where it gets cool. 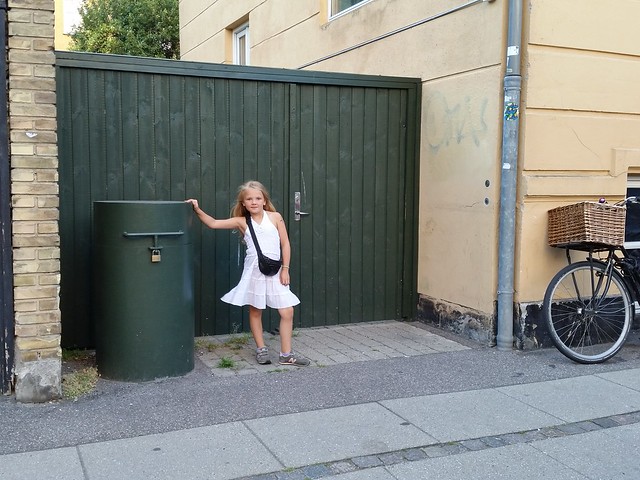 Out on the sidewalk, outside the backyard, about 60 metres away, this cylinder stands all quiet and sentinal. An unassuming addition to the street. 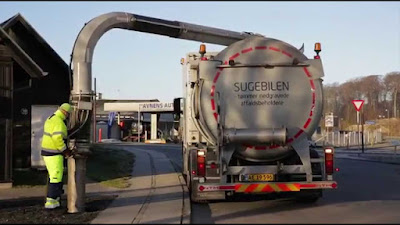 We never see the elusive "sugebil" or "suck truck" if you like, but it will roll up to the cylinder, unlock it and attach a badass vaccum to the top. Hit the switch and all the garbage in the two underground containers are sucked into the truck at a speed of up to 70 km/h.

It's over in under two minutes, with a minimum of noise and fuss. Call me urbanist geeky, but I get a kick out of this. But I've been looking into this lately and I've found out that there are 240 of these systems in Denmark, sucking garbage from 27,000 flats. Not surprisingly, most of them are in the densely-populated cities.

Many of the systems suck garbage from multiple backyards at once, from much farther distances than ours. Be still my urbanist heart. The advantages are many. I assume it's more cost-efficient to do this rather than have garbage men traipse in and out of countless backyards dragging wheeled containers behind them. I certainly don't miss the early morning noise waking me prematurely up. Eliminating smells is certainly a bonus. We have a big problem with rats in Copenhagen, so this kind of system separates them from the garbage, too.

Most of these systems are retrofitted in the backyards with a simple cut and cover operation to install the pipes and lead them out of the backyard through the gateways. These are sucked up by the trucks. There are also apartments built in the 1970s and 1980s where the garbage chutes are installed in the stairways and the garbage is collected in a container in the basement. Sometimes a truck will suck from there, other times the garbage is first sucked to a larger container, after which it is picked up by trucks.

I quickly got sucked into learning more about this system that I have taken for granted for years.

It turns out that all the garbage in the picture postcard area of Copenhagen called Nyhavn is now rigged with this kind of system. Which is awesome.

It also turns out that this system was developed in the early 1960s in Sweden and was first implemented in a hospital - Sollefteå Sjukhus - in 1961. It is still in use today with many of the original parts. In 1965, the first housing development installed a system - Ör-Hallonbergen in Sundbyberg, Sweden. Again, it's still working fine today and has become the largest housing area with garbage sucking in Sweden. While writing this I was trying to figure out what to call garbage sucking. You know, for the Americans. Sucking would probably be deemed socially unacceptable, rude and politically incorrect. It's "affaldssug" in Danish. Garbage suck. What about "Vacuumed Waste Removal System"? Oh, nevermind. 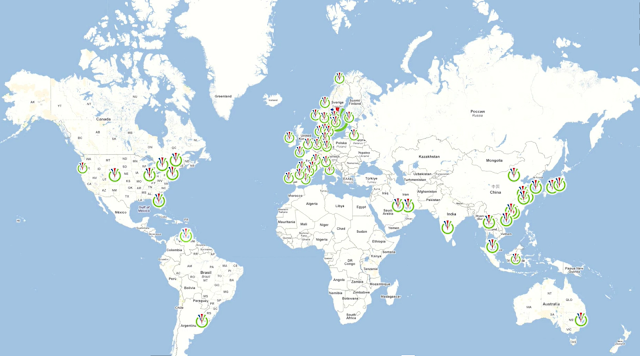 By all accounts, a Swedish company named Envac sits comfortably on the Garbage Sucking Throne. They invented it and they have mastered it. They now have 700 installations in over 30 countries. Most are in Sweden and Denmark and the other Nordic countries, so it's not as though this system is widespread.


Envac Group - Official company presentation from Envac Group on Vimeo.
Here is a film about their products. Once you get past the overly-dramatic music and lame speaker voice, it gets interesting. 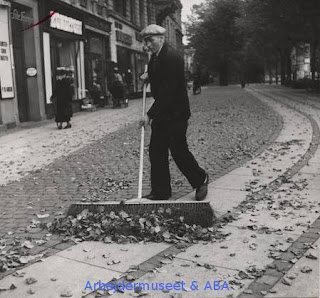 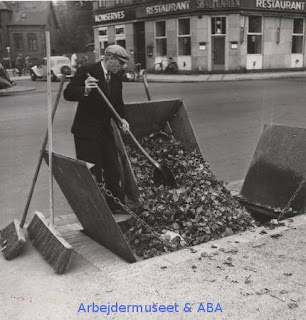 Using underground facilities is nothing new. These photos are from the 1940s in Copenhagen. Leaves were swept into underground containers. I'm still trying to figure out how they were moved from there, afterwards. But hey.

Is garbage sucking the perfect waste management solution for cities? It just might be.