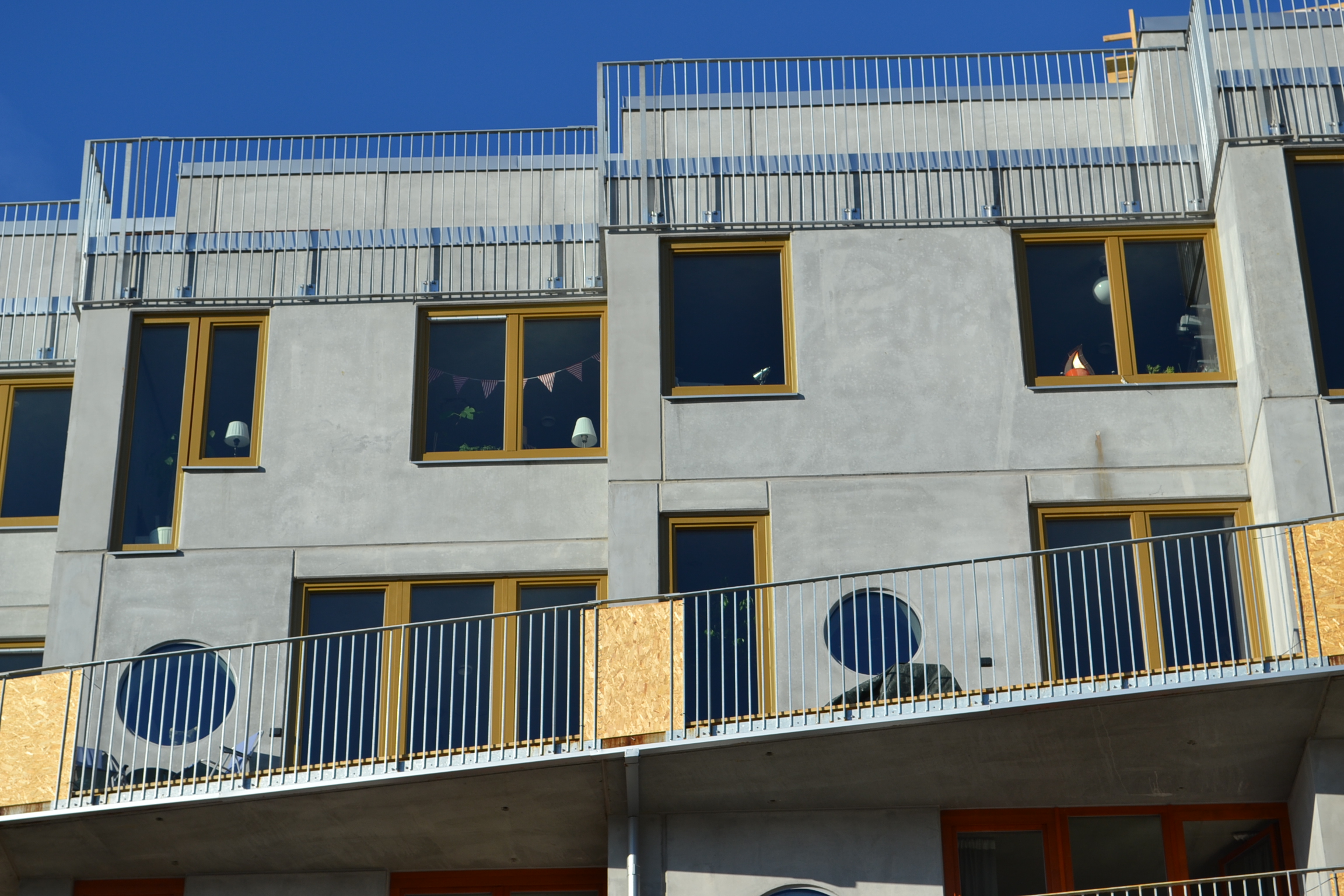 Jennie Fasth is a cyclist, bicycle advocate and freelance writer based in Malmö, Sweden. She is currently a student at the University of Lund, studying geographic information systems. She is working towards her Masters degree in urban planning. This article of hers was first published on the Swedish website HappyRide.se and is republished here on Copenhagenize.com with permission.

OhBoy - The Swedish Bicycle House is Open
by Jennie Fasth

On 23 October 2015, the first sod was turned for what would become the first "cykelhus" - or "bicycle house" in Sweden. The development is named OhBoy and is located in the Western Harbour (Västerhamn)  of the City of Malmö. Tenants have now gradually started moving in. What does the Bicycle House look like? Who are the residents and what do they think about their new and unique building? I decided to find out. 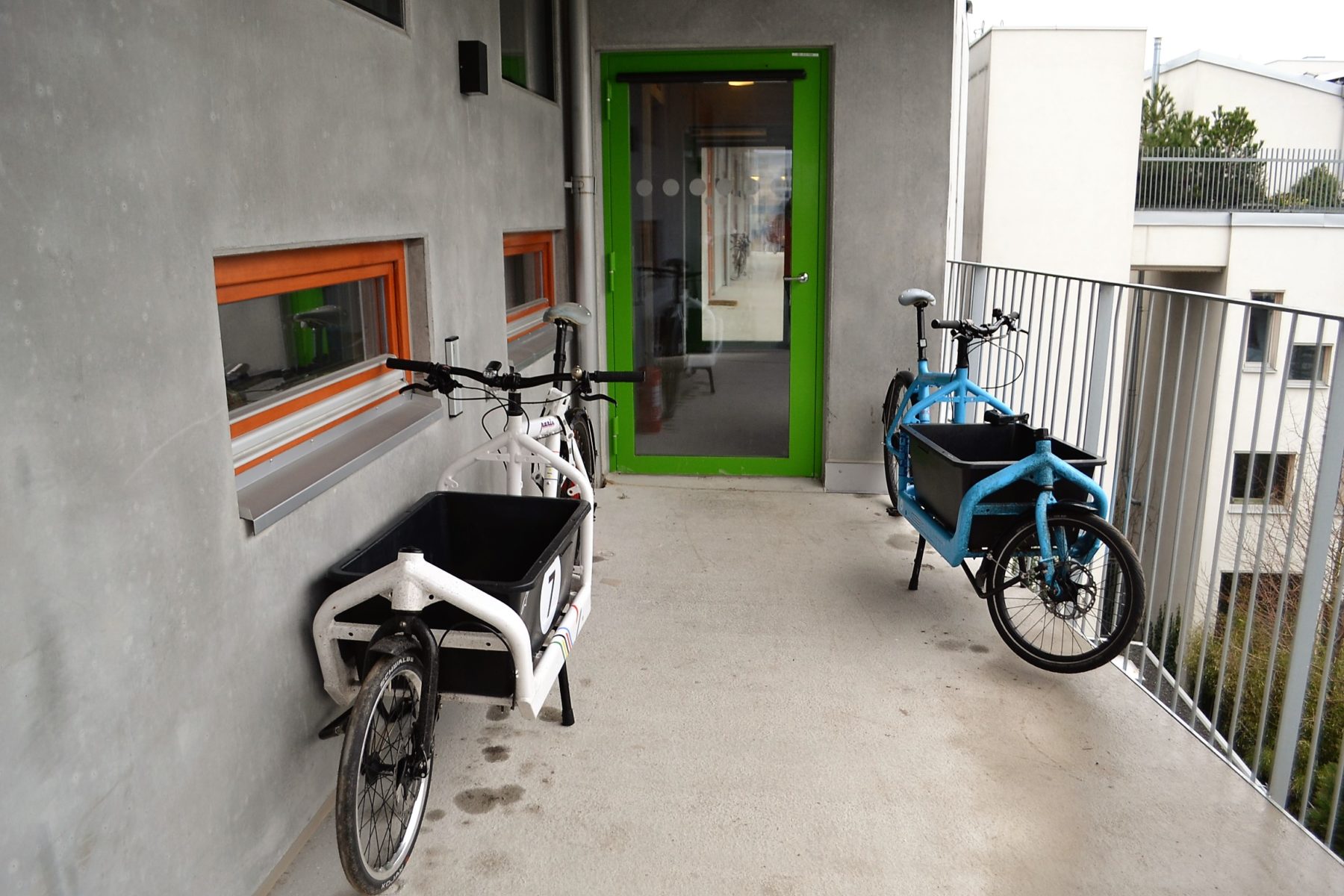 All 55 apartments are rented out and there is no doubt that bike-minded people were among the first to move in. Not all moving vans have arrived just yet, but there is no shortage of bikes. Along the access walkways, there are many regular bikes and cargo bikes. The bicycle garage is a beehive of activity, as well. 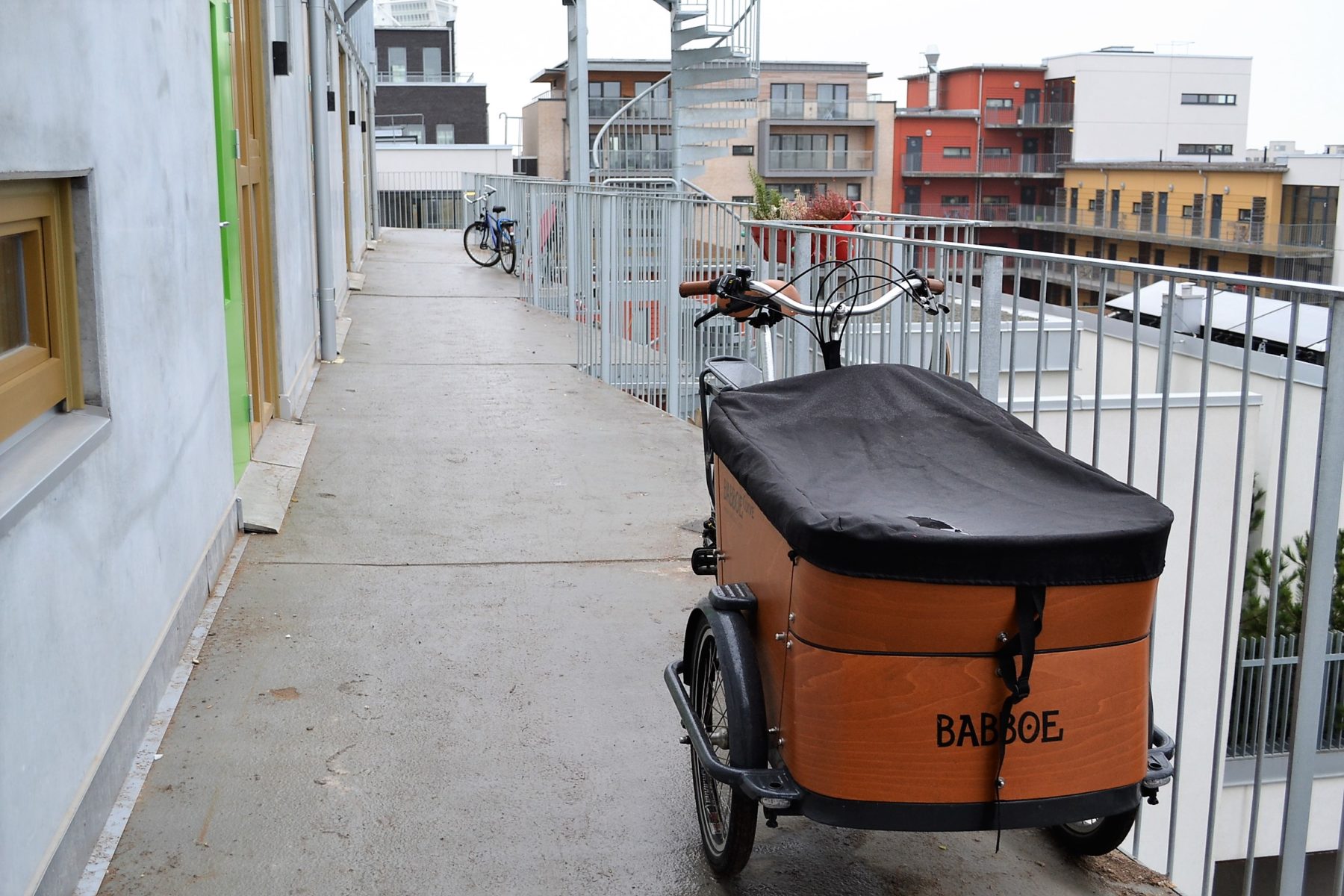 There are bicycles on every floor and, unlike traditional apartment buildings, bikes are more than welcome on the access coridors. The railings are reinforced and extra space has been designed in, allowing for wider bikes to fit - without conflicting with fire regulations. 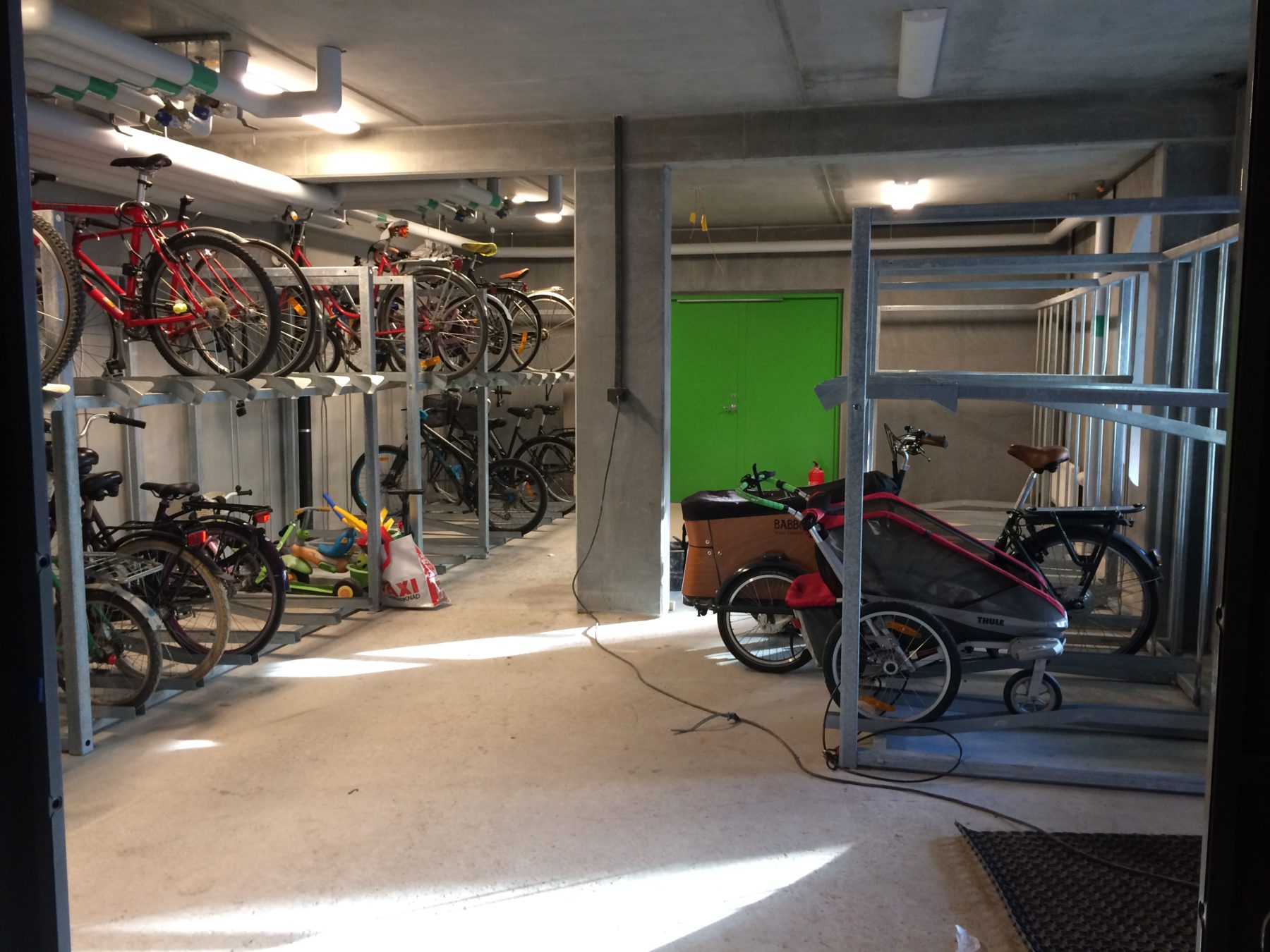 Although tenants start to arrive there remains a lot to do on the house. Three places to tinker with bikes, will be available shortly, two outdoor and one in the basement. These will be provided with tools for residents to borrow. Tenants will also have access to a bicycle pool and three of the custom-made bikes arrived just the other day - from Danish DIY cargo bikemakers XYZ Cargo. 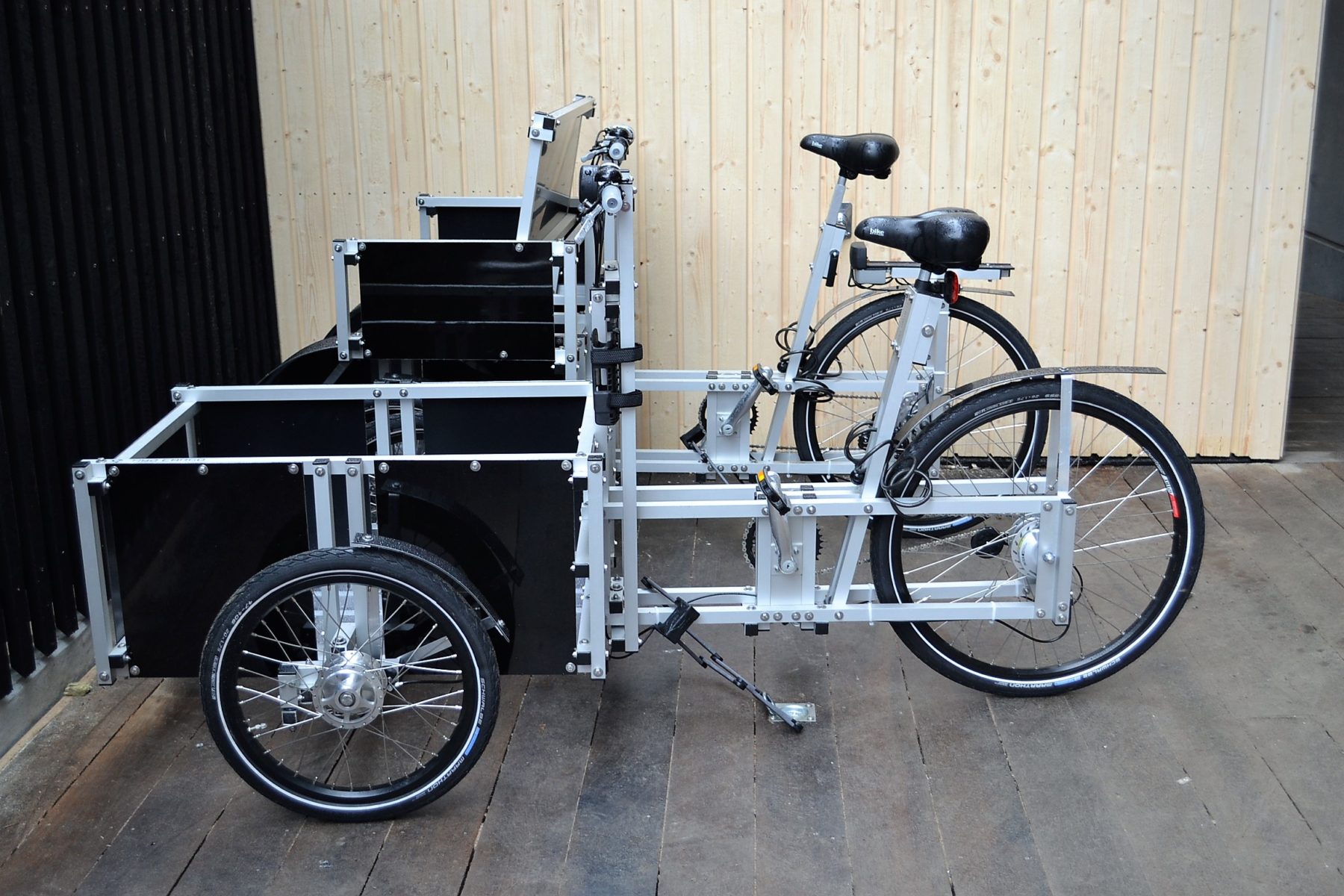 The architecture bureau Hauschild + Siegel has designed, built and will manage the Bicycle House. They spent a great deal of time finding solutions to make the building as bicycle-friendly as possible. The bicycle pool is no exception. In order to maximize the comfort for residents living car-free, they have ordered bikes from XYZ Cargo in Copenhagen. In addition to the traditional three-wheeler cargo bike, residents can borrow both a kindergarten cargo bike with room for six children and a bicycle taxi with room for two passengers. Even some folding bikes have been ordered. 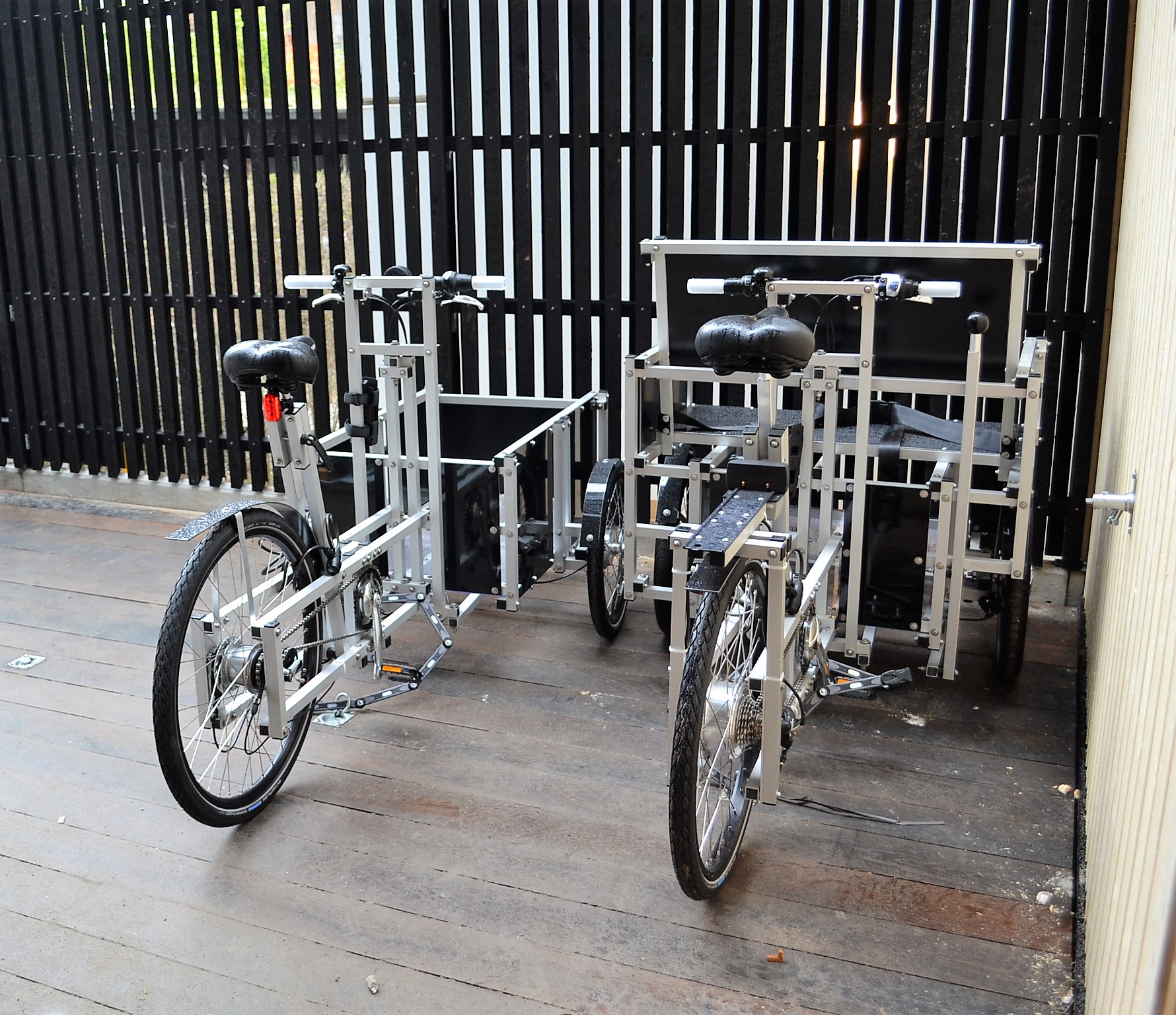 These cargo bikes will have a separate parking area under a roof and next to the car park and the bike washing facility. After consulting with a landscape architect, an environmentally-friendly system has been developed. The traditional oil separator will be replaced with plants that will act as a filter in the cleaning process. Environmental considerations are consistent in the vegetation, the environmentally-friendly building materials and solar panels. 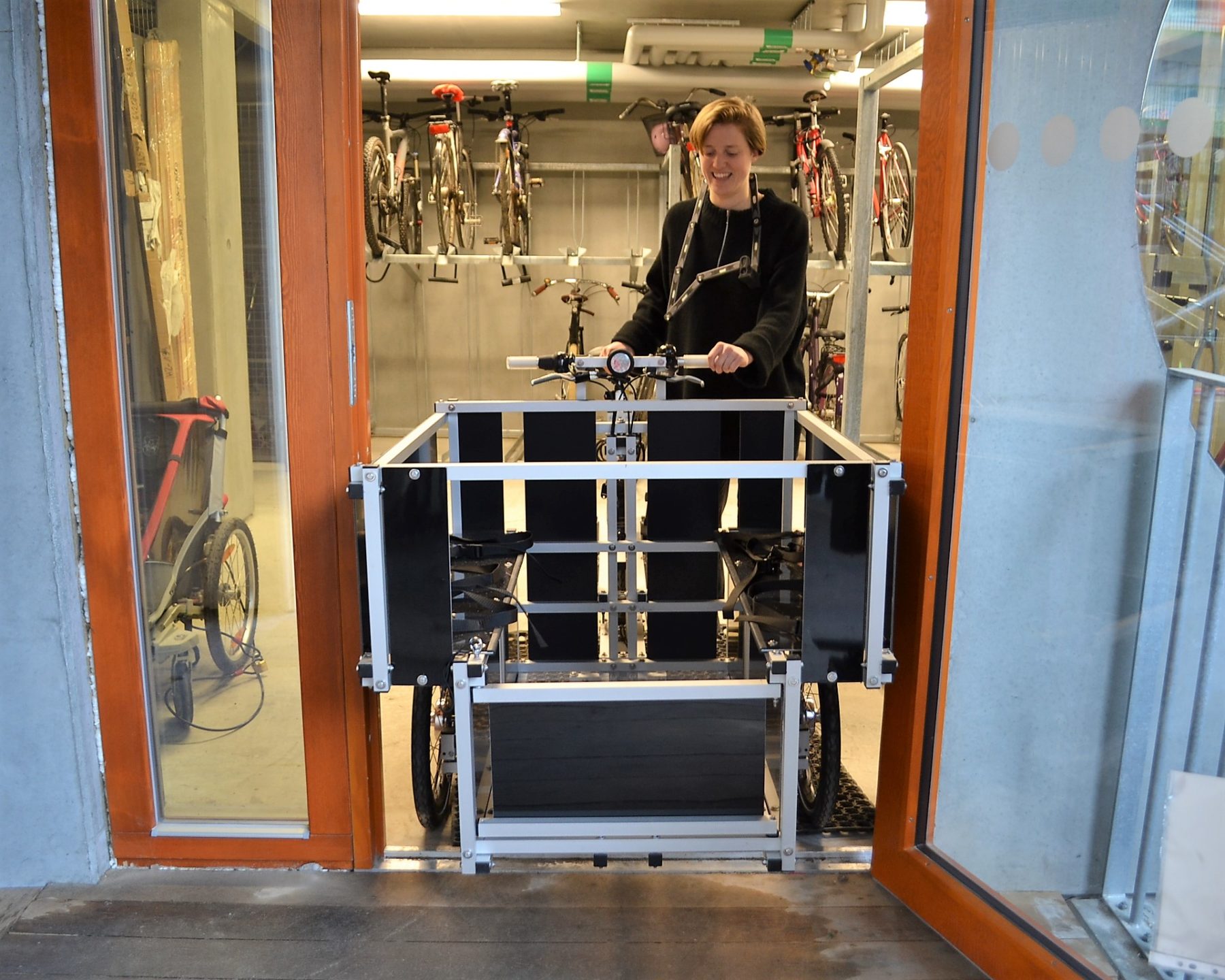 The kindergarten bike and the bike taxi are extra wide, but the building is designed for them. All doors are 10 cm wider than normal, which makes it possible for the residents to take their bike anywhere in the building. Even right up to their apartment door if necessary. In addition, every door is equipped with a door opener for easier access. 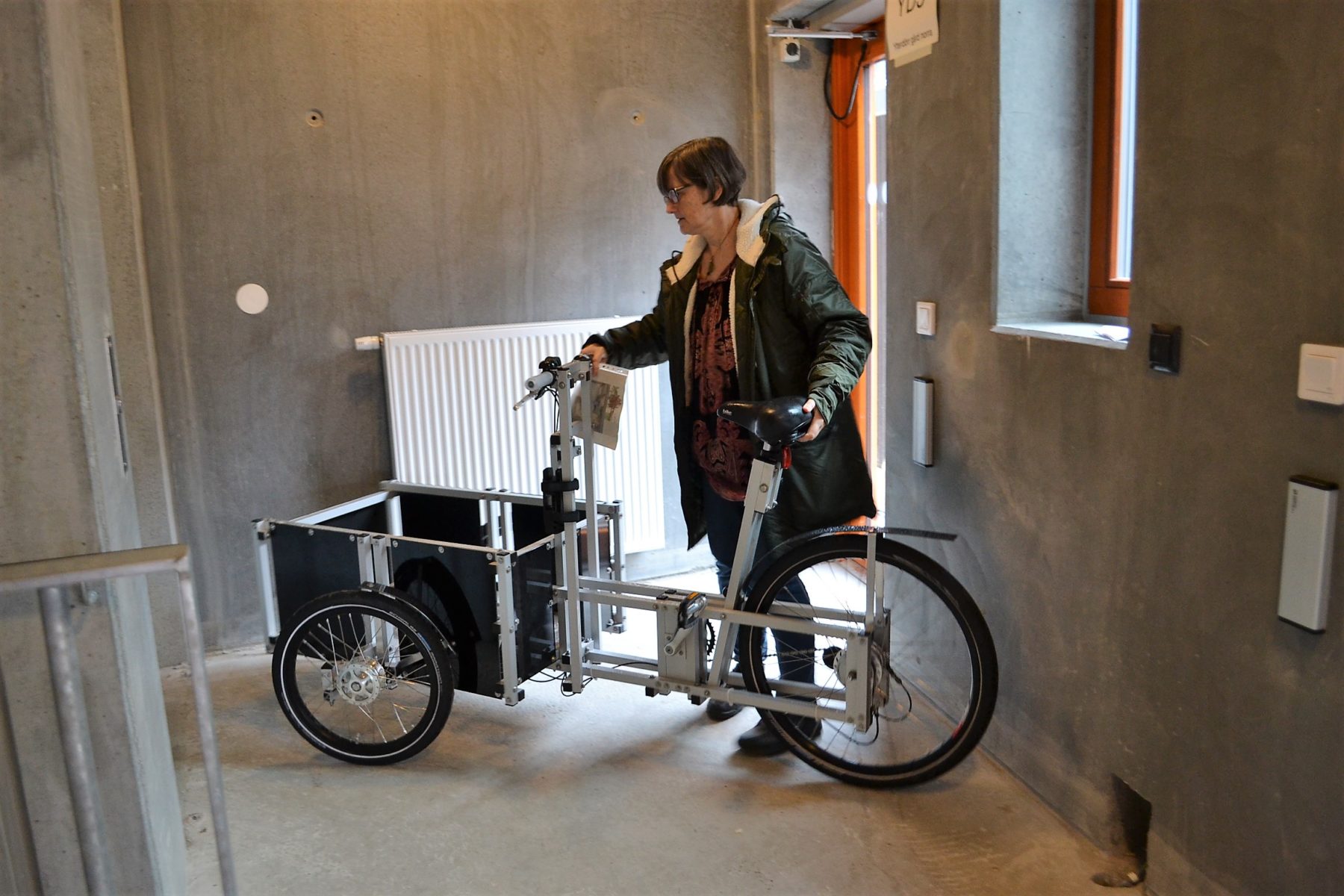 The architects have also thought about that all important turning radius in stairwells. Wider than in traditional apartment buildings. The bikes also fit easily into the elevators, which are wider and deeper than normal. 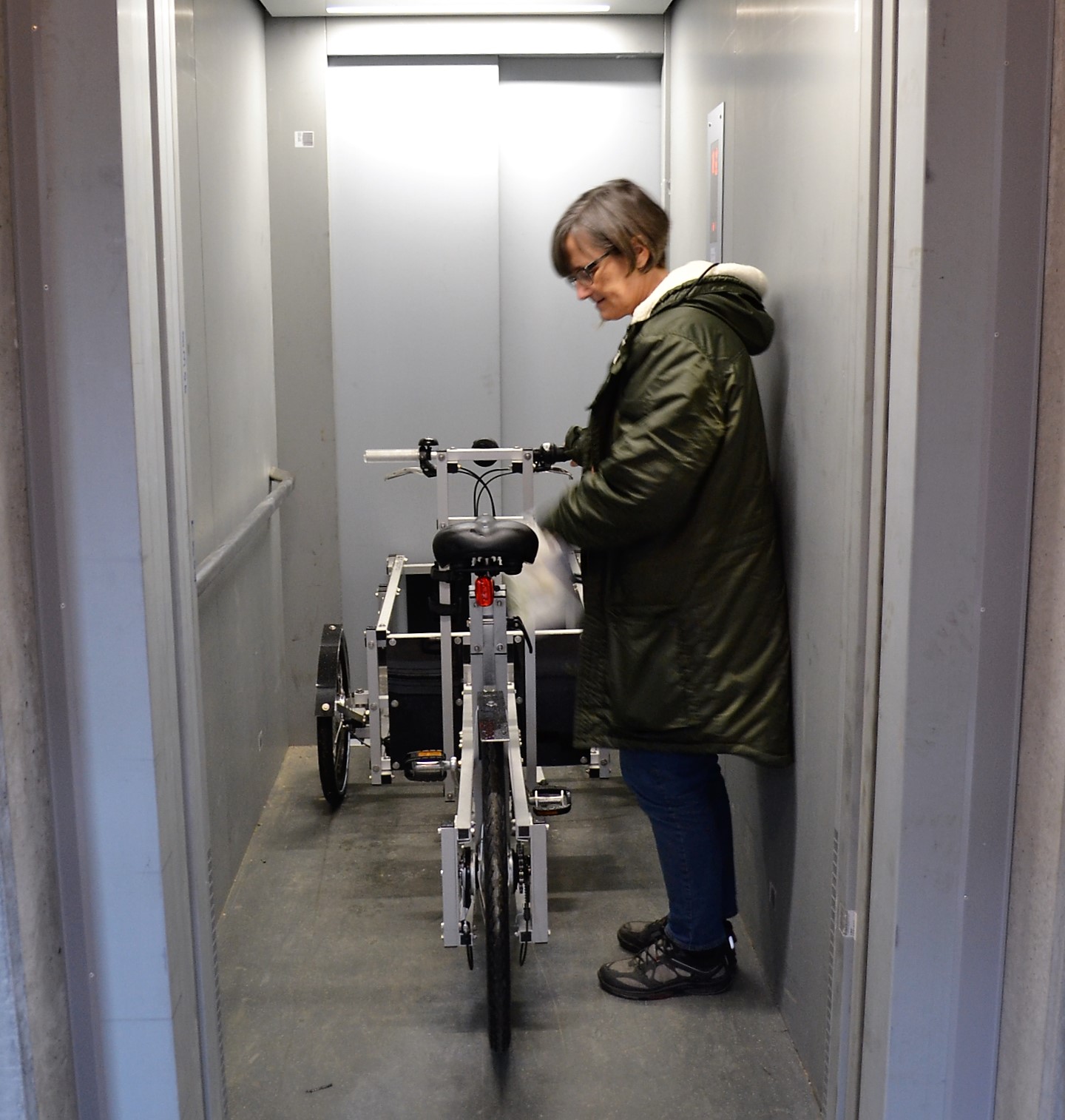 It is easy to understand why the access walkways are teeming with cargo bikes. It is so easy to take them with you up to your apartment. The residents don't have to unload the bike and then carry everything up to the apartment. This ease-of-use could not be easier. 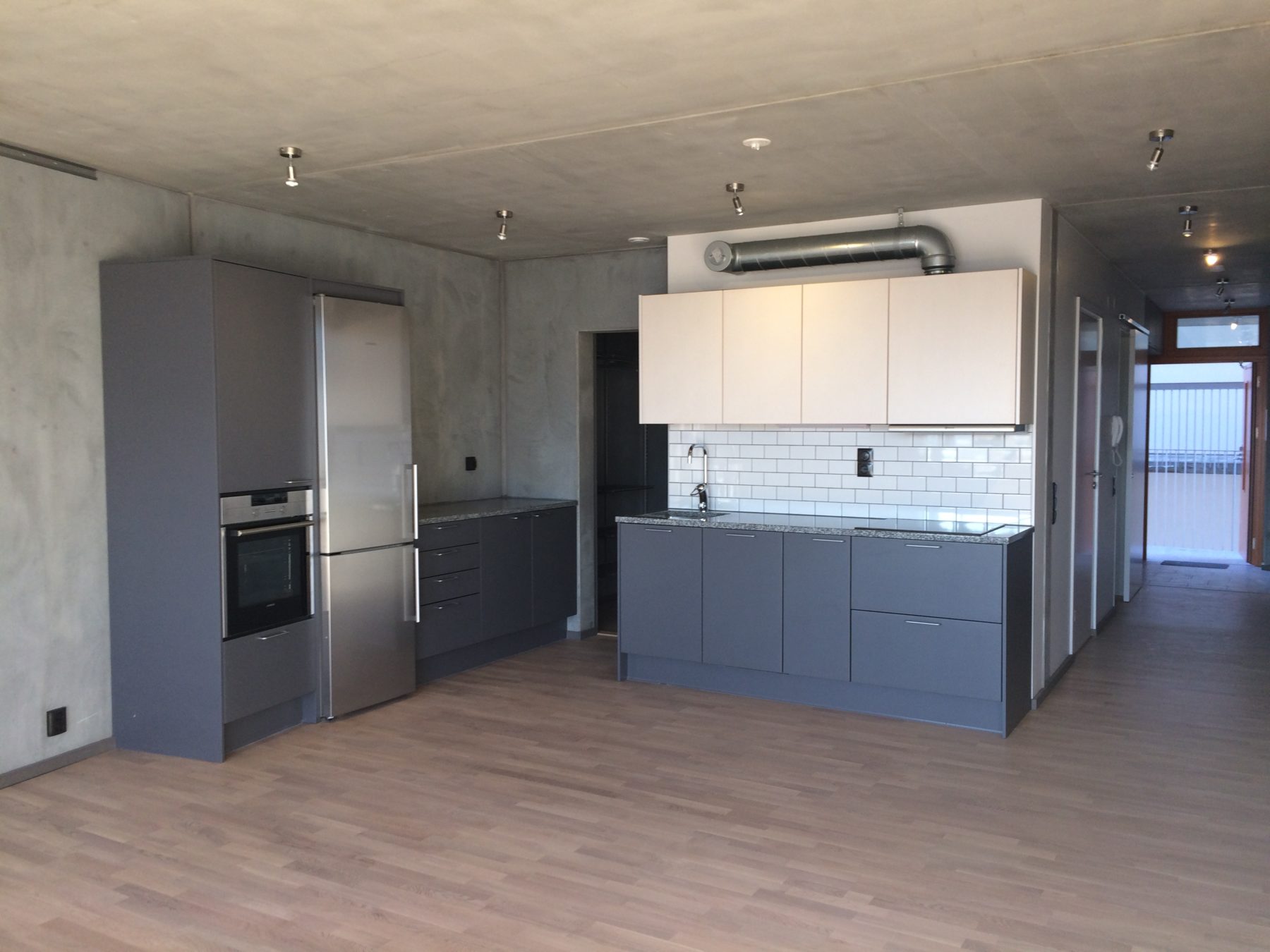 You don't need to stop at the front door. The apartments are designed so that bikes can be wheeled right to your fridge, if you so desire. The apartment doors are also 10 cm wider than the norm. The kitchens are designed by Finnish company Puustelli and consist of cabinet doors in glazed birch (gray and white in most apartments) and the countertops are Finnish granite. All units are fitted with induction stoves, convection ovens, dishwashers and a washing machine. 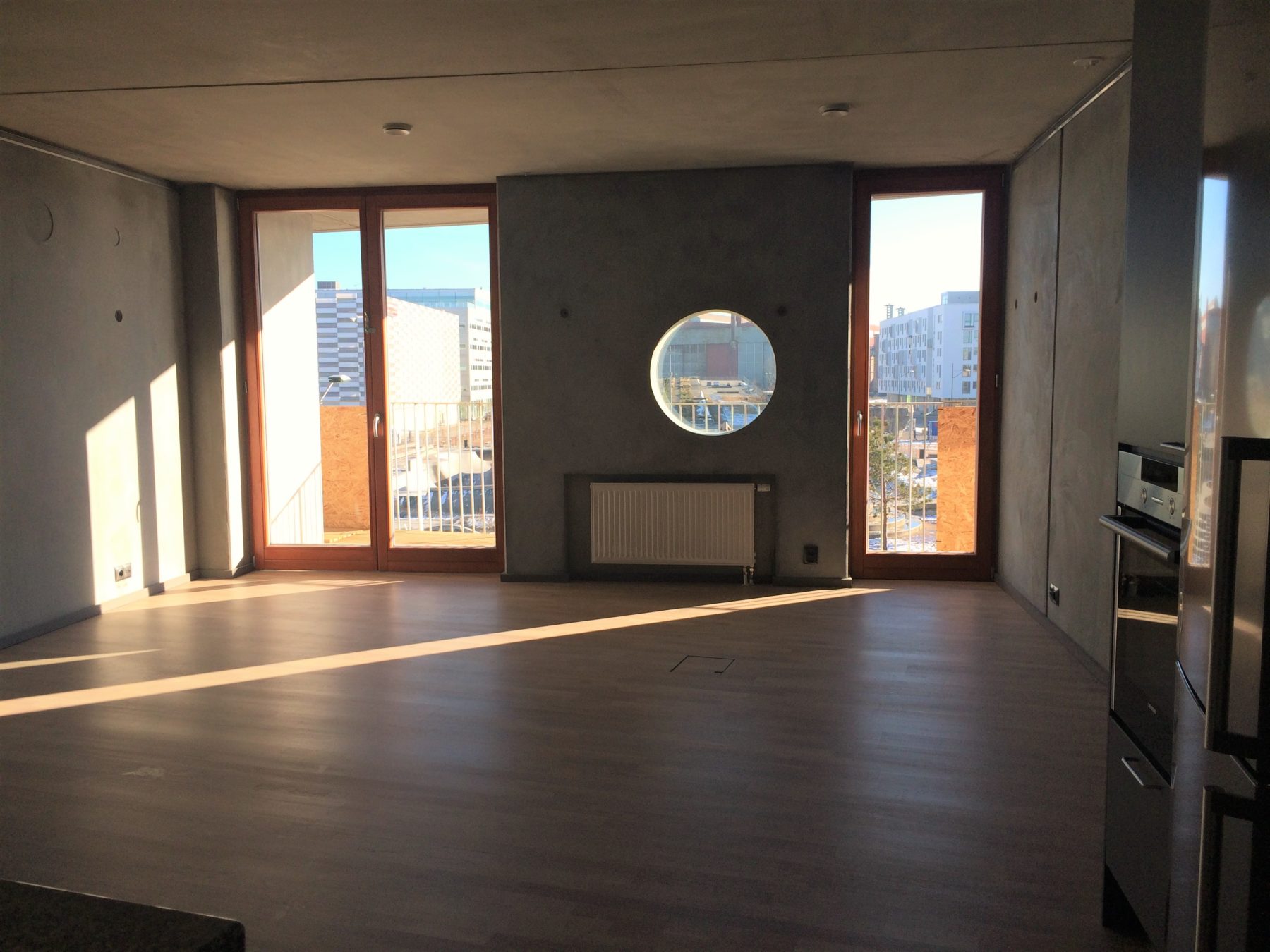 The open floor plan provides plenty of opportunities to decide for yourself how you want to design the accessibility in your apartment. Interestingly, the walls and ceilings are concrete and it is not allowed to paint them. Picture frams and curtain solutions are provided by the building administrators. You'll need permission to drill in the concrete walls. 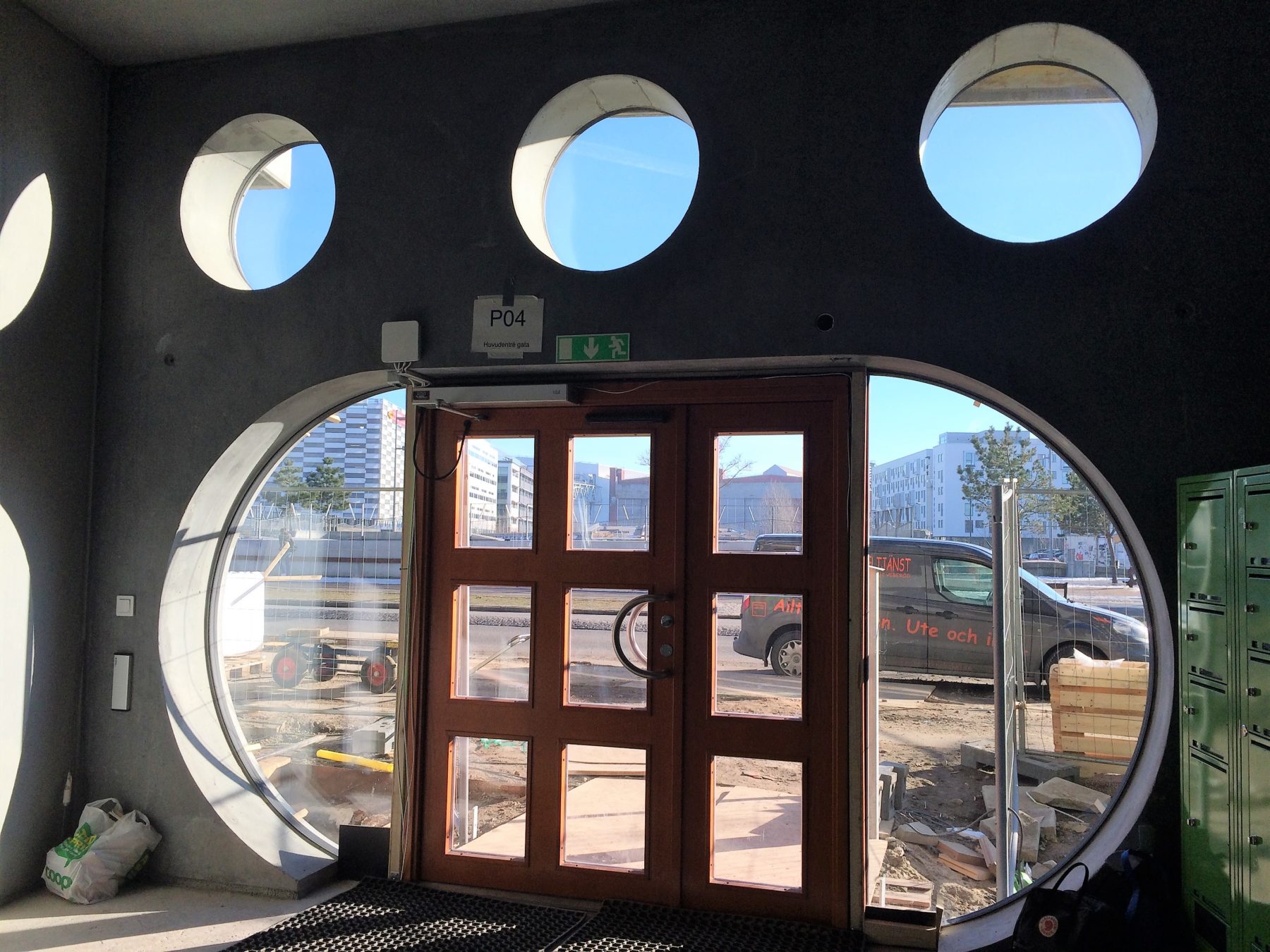 Regardless of which door the residents use to enter the building, bikes are thought into the design. All doors are wider and the elevator opens at front and back so you never need to turn your bike around. 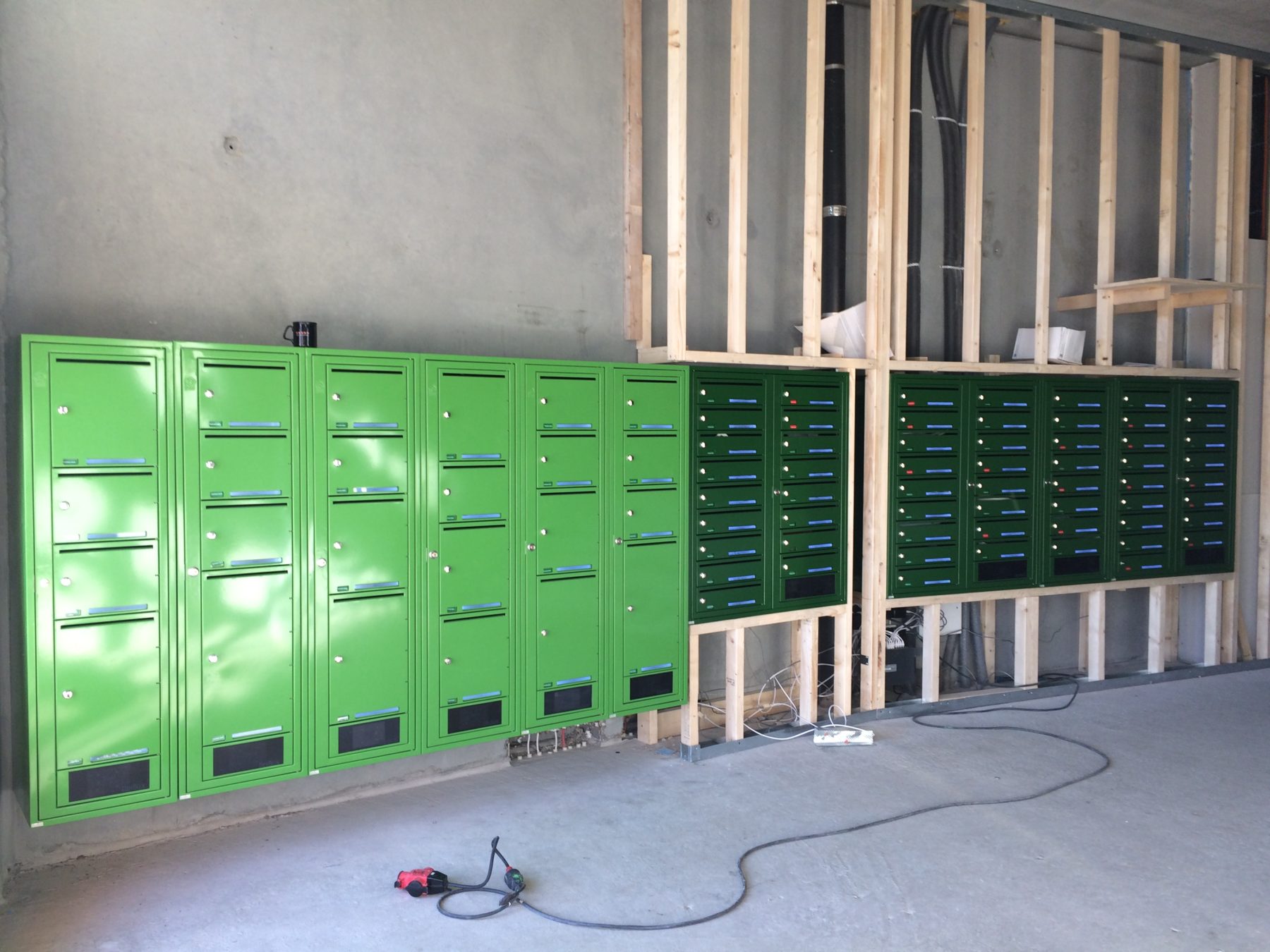 Post boxes are available at the entrance and accommodate both large and small post. The idea is that the residents can shop from home - as so many people do - but also to make it easy to recieve packages. In addition to the cargo bikes, there is also a car share program included in the apartment.

It is totally possible to just wander around the entire building all day and study all the cycling options and details. There are small touches everywhere that are part of the big picture in a building designed for people who have chosen a car-free life. We were able to meet some of the residents to hear why they moved into Bicycle House. 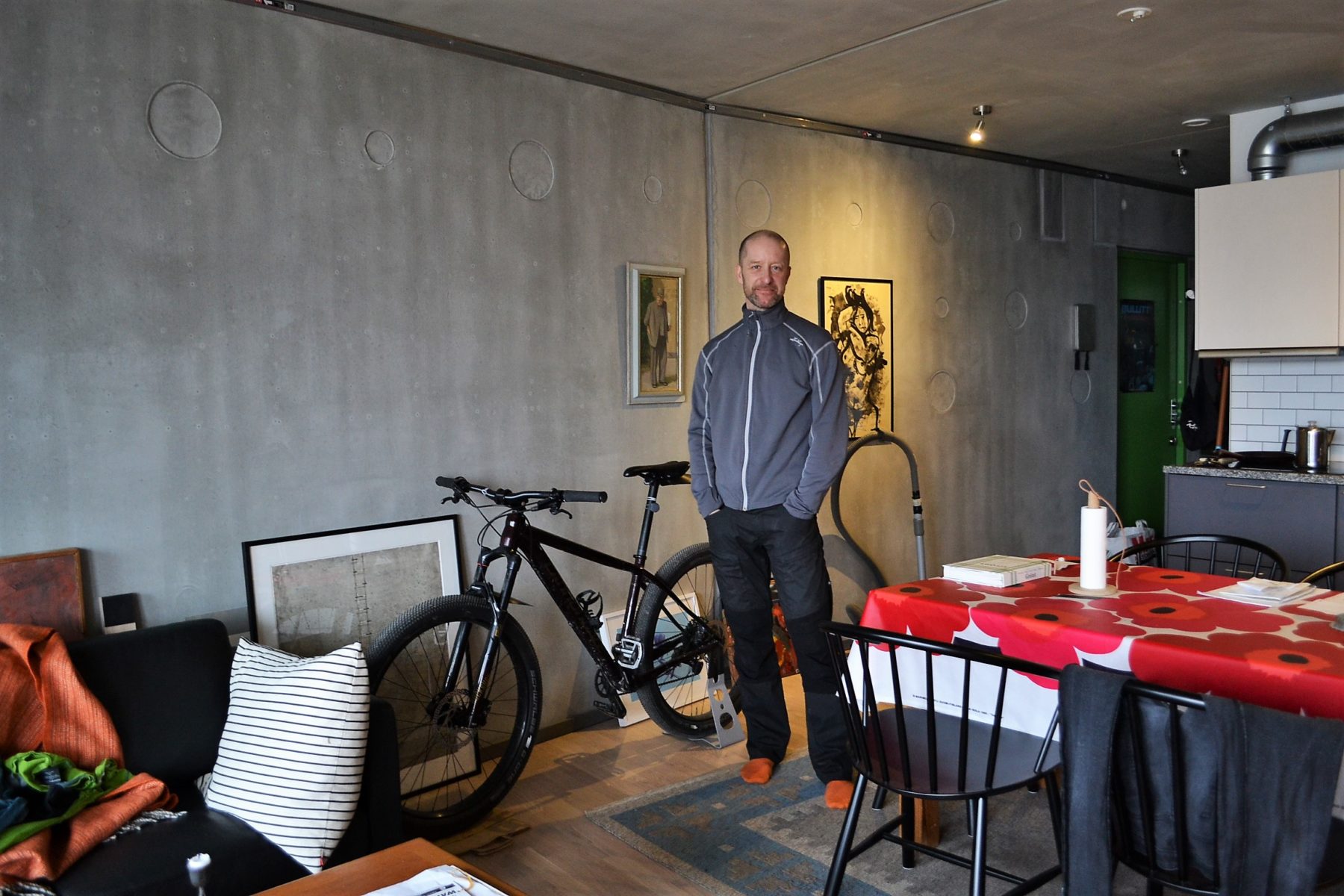 Ola Fagerstrom is an avid cyclist with many bike kilometres behind him. He has a cargo bike, a cyclecross and a mountain bike in his collection. He worked for a year at Danish cargo bike brand Larry vs Harry in Copenhagen, so it's no surprise that a Bullitt cargo bike was the one he chose. You'll see Ola whizzing around on it in Malmö. He sold his car two years ago and hasn't any reason to buy a new one. 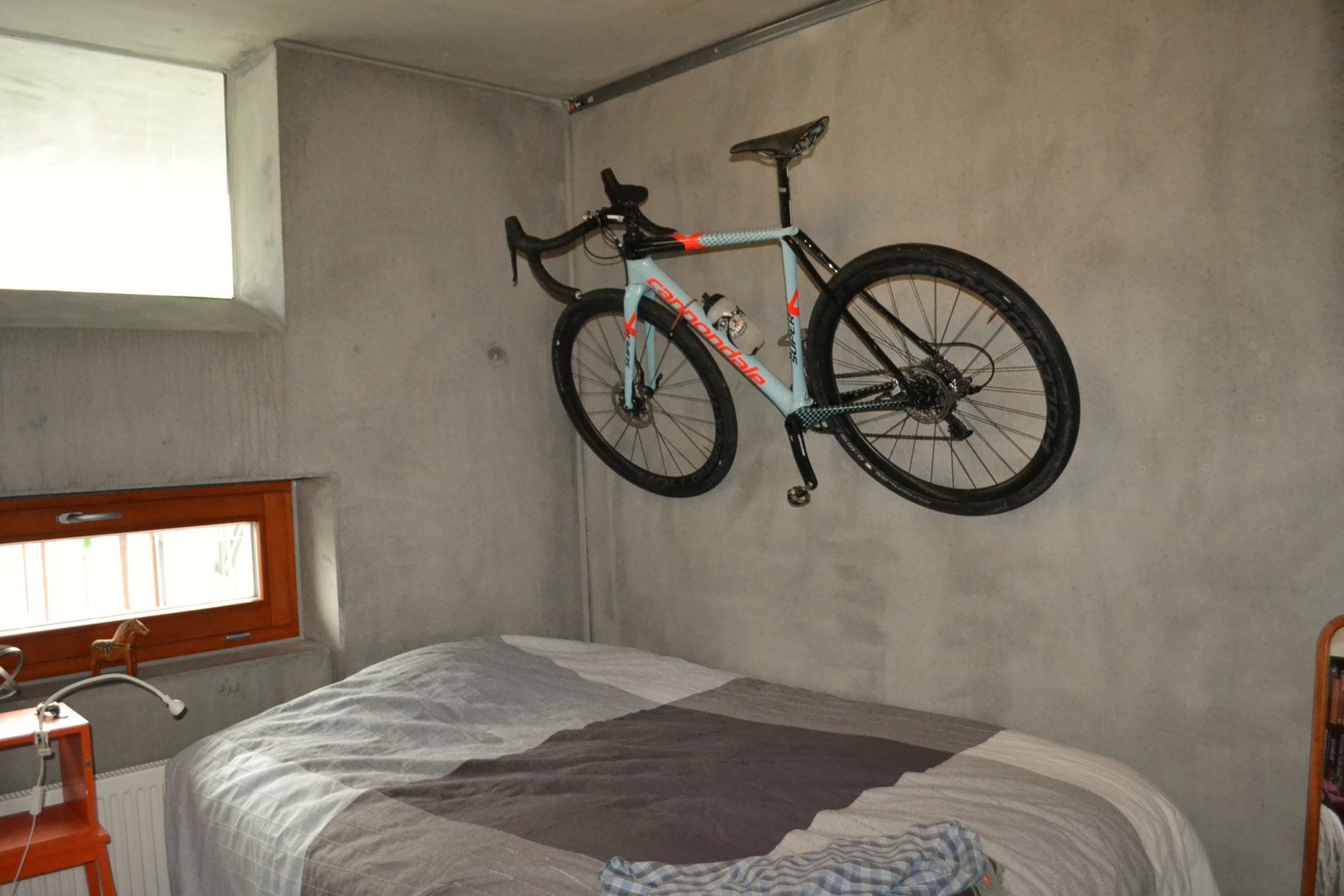 Moving to the Bicycle House has only been a positive experience. Ola's son, Malte, used to have t ride 10 km a day to get to school in Western Harbour, and now has a much shorter journey.  Ola enjoys the area's industrial feel and calm streets. He likes not having a building across the street and the view of Stapelbädds Park is harmonic, he says. Although there is still construction noise in the building, it is still very quiet. It is impossible to hear the local skate park or the traffic nearby. 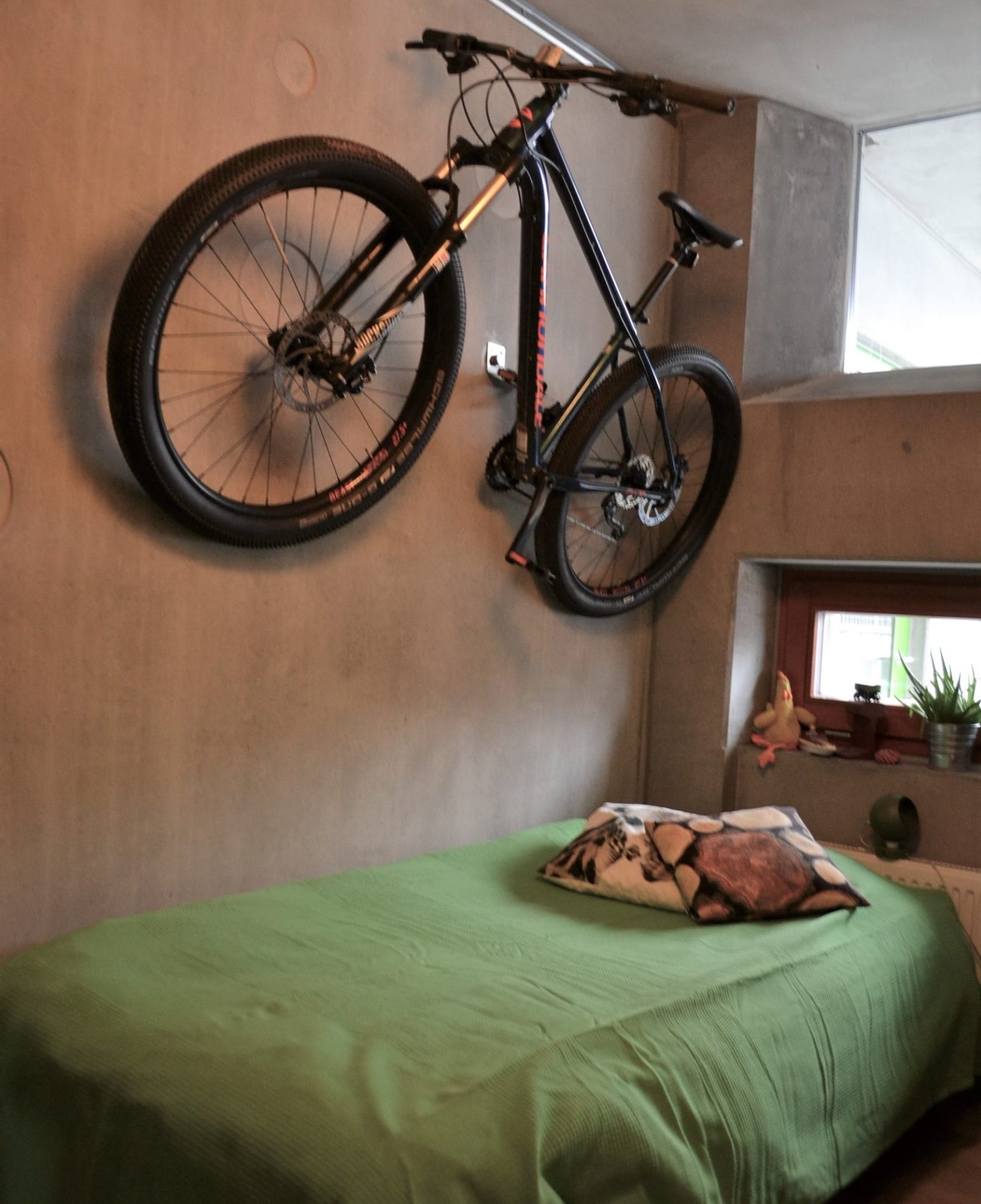 Ola's bike expertise has been harnessed by the building's community and he has had the opportunity to take part in both the purchase of tools for the workshops and the bikes for the bicycle pool. Even though it has only been a few weeks since he moved in, Ola is thriving. He thinks it is fantastic to smoothly roll his fully-loaded Bullitt cargo bike into the elevator and park outside his front door. 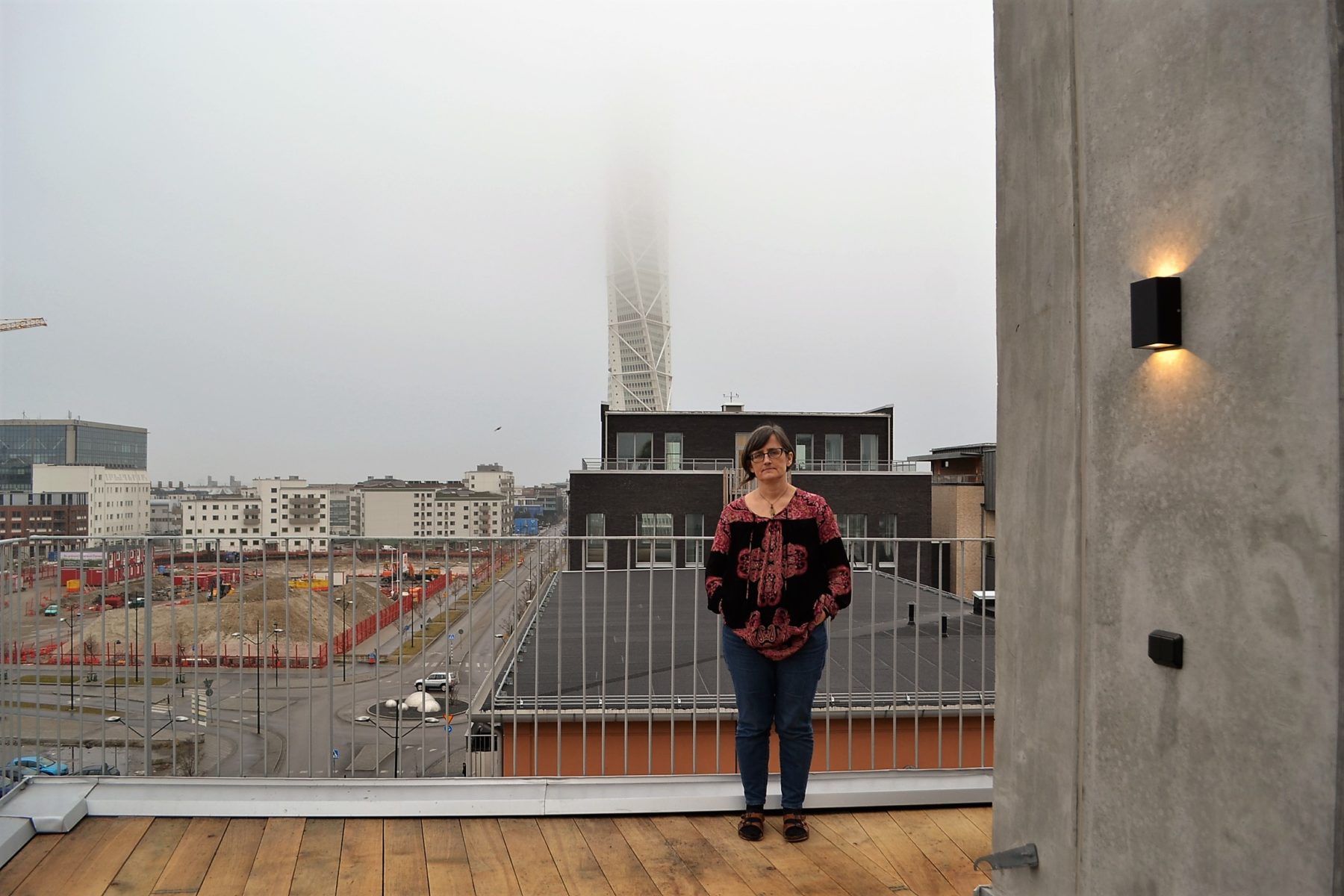 The next resident we meet is Johanna Ekne. She lives and works in the building and will be responsible for the coming Bicycle Hotel and while the decision to move here was work-related, it was the design of the place that sold it to Johanna. Her family innovative thinking and a building dedicated to cycling felt right. 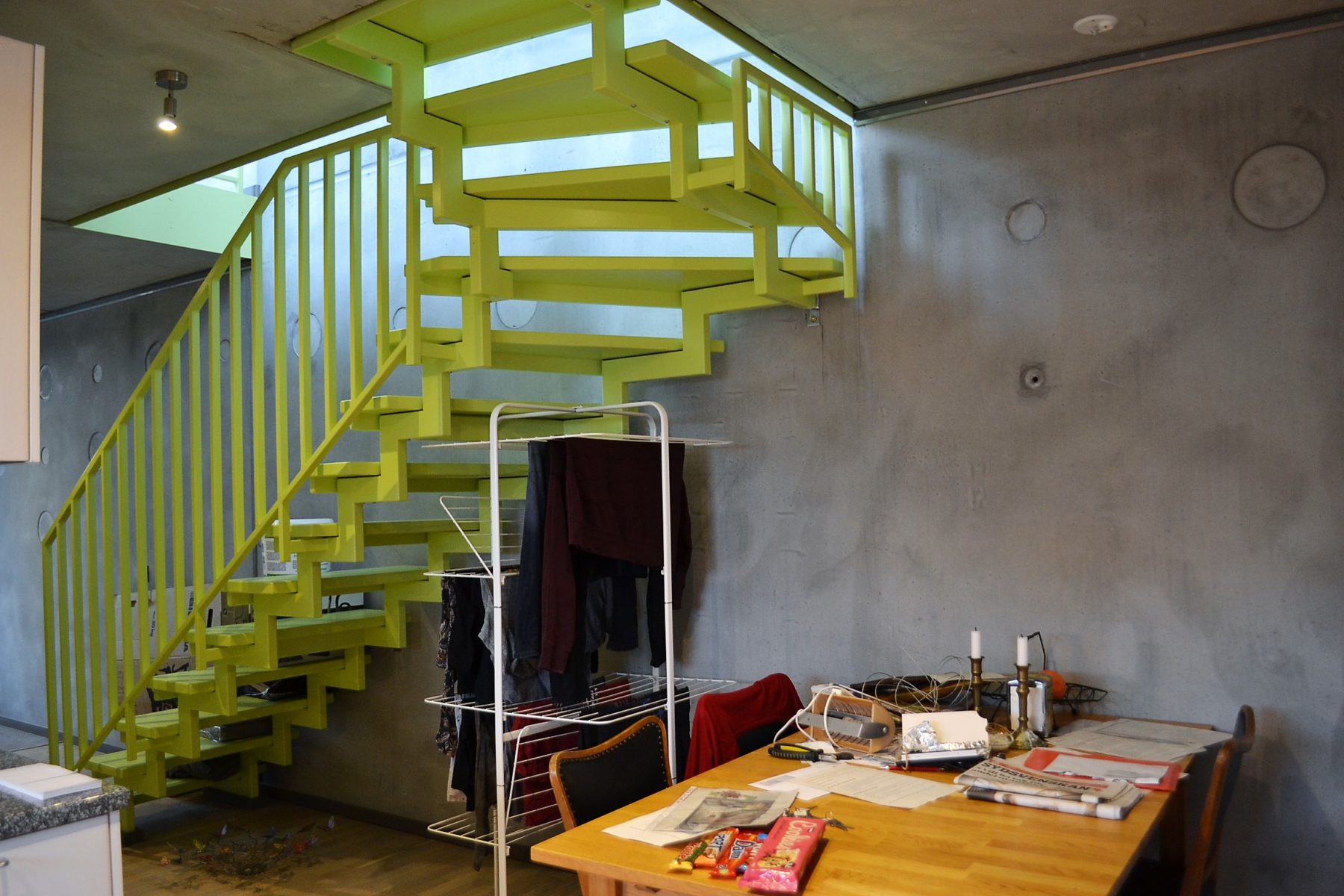 Moving boxes are not yet emptied and there is much to be done but Johanna loves it. The apartment is very different that the old house in Möllevången where she moved from, which had four flights of stairs and no lift. The family also had problems finding space for their bikes. Today, the bikes are parked outside their flat, which Johanna thinks is brilliant. 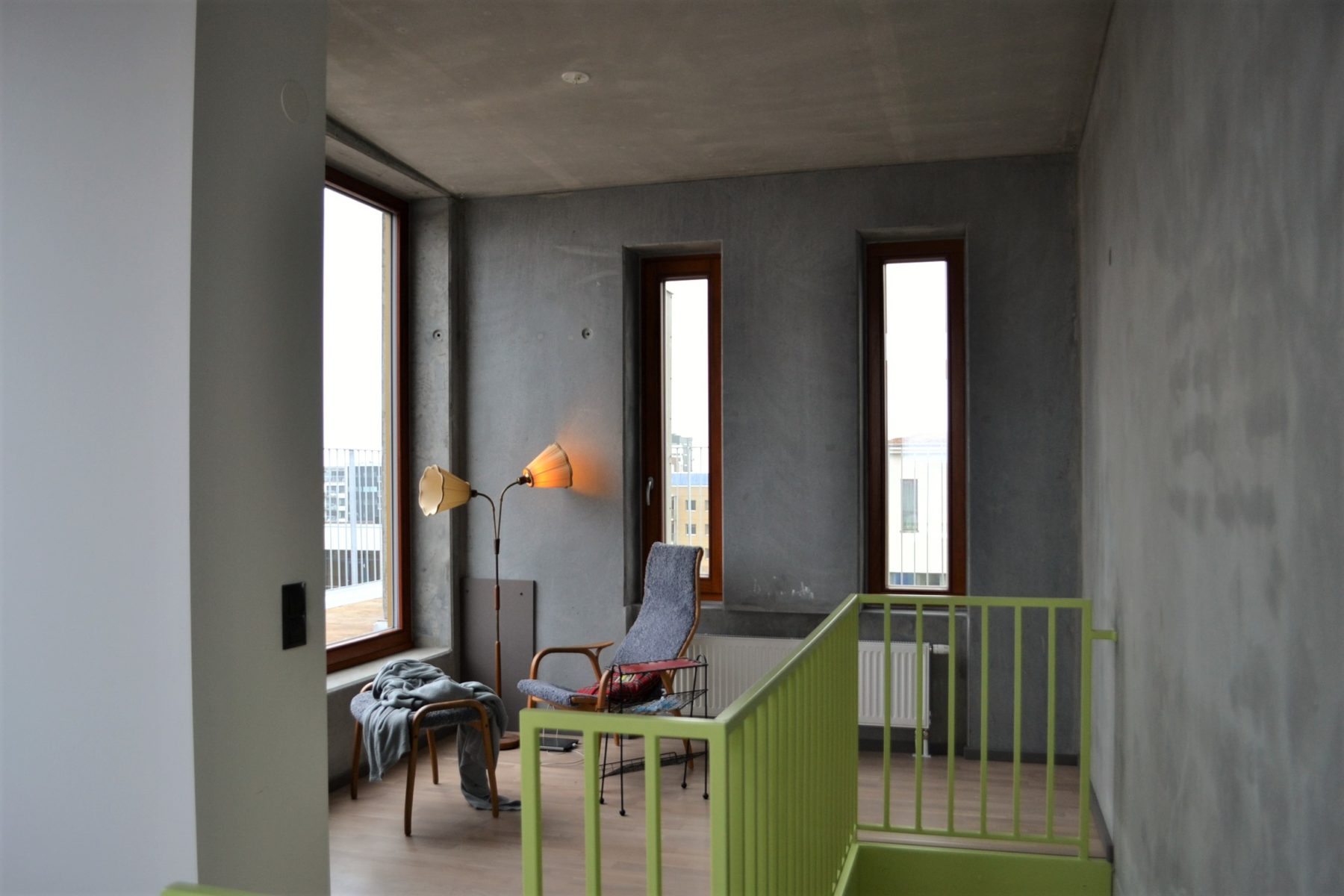 The family kept their car during the move but now have plans of selling it. Something Johanna looks forward to. "It will be great. Everything is easier by bike".

The family lives at the top of the building and the apartment has two levels. Each apartment on the 6th and 7th floor has a spacious terrace that will  eventually be fitted with green barriers and flower boxes to provide some privacy. 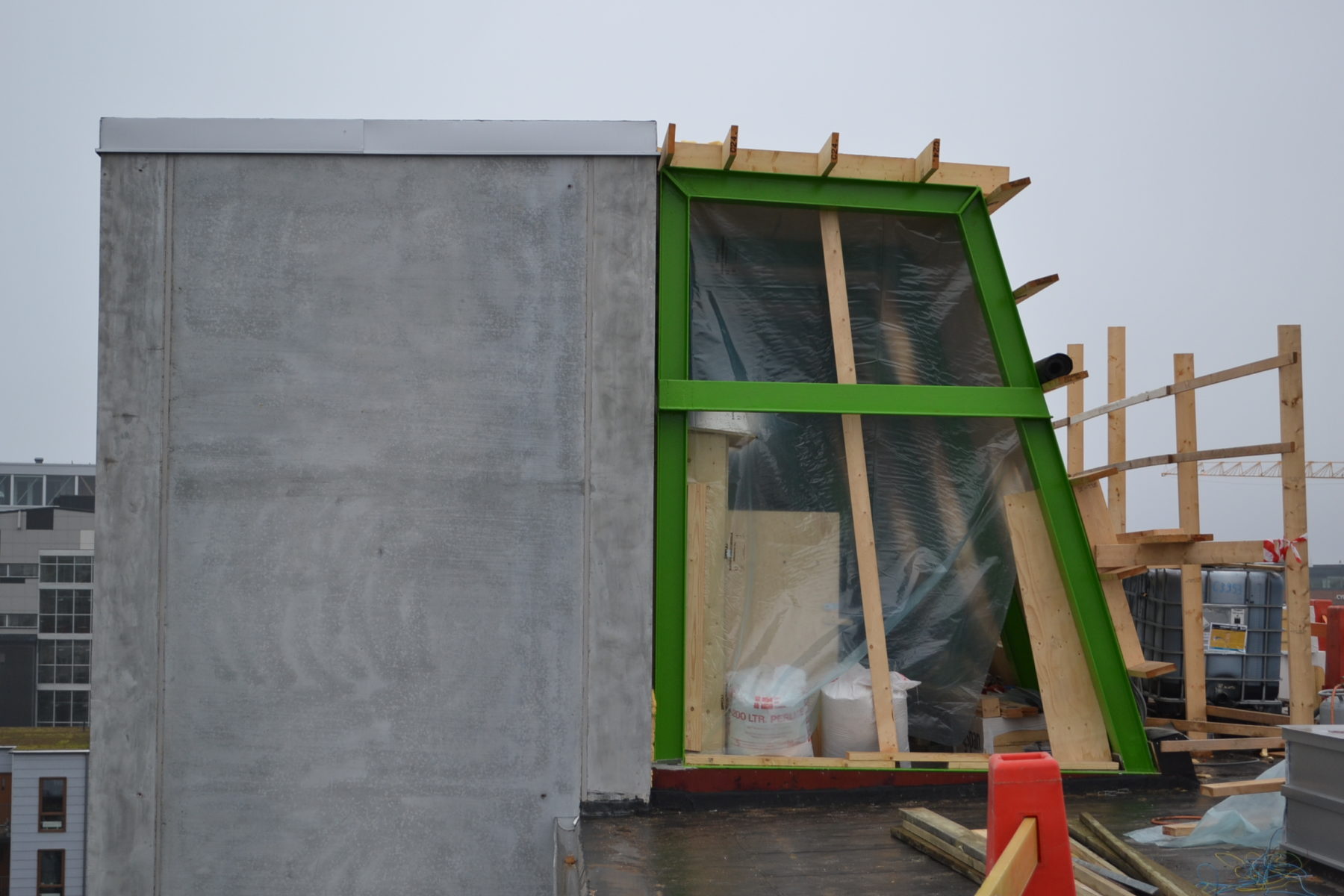 For the residents who don't have a large terrace, the view can be enjoyed from the roof terrace. An orangery is being built and all vegetation will be in place by April 2017. 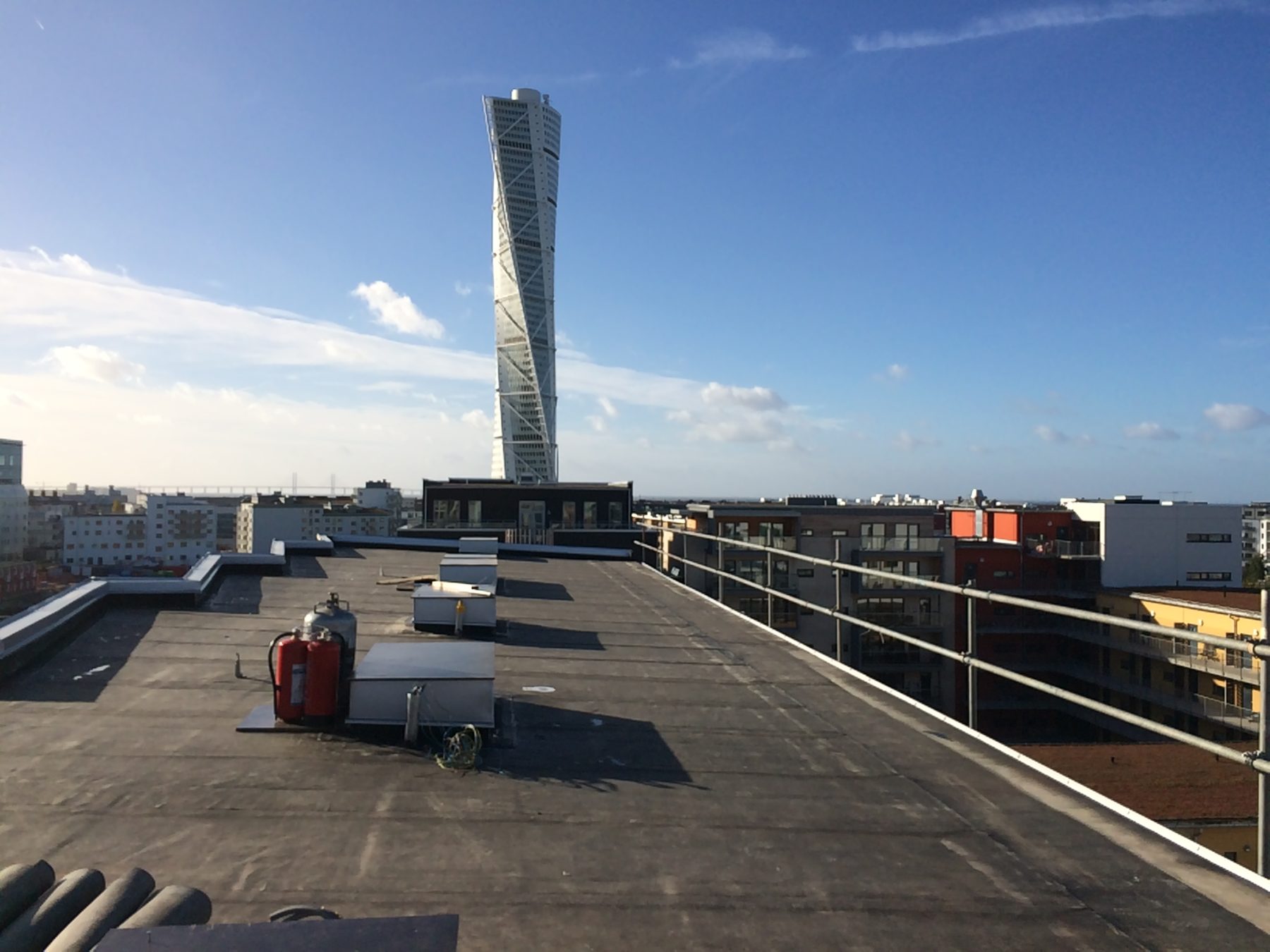 Moving boxes are still arriving in a steady flow and most residents are expected to move in by the time the Bicycle Hotel opens. March 1. 2017 is the date that the 32 apartments on the ground floor will be ready for guests. 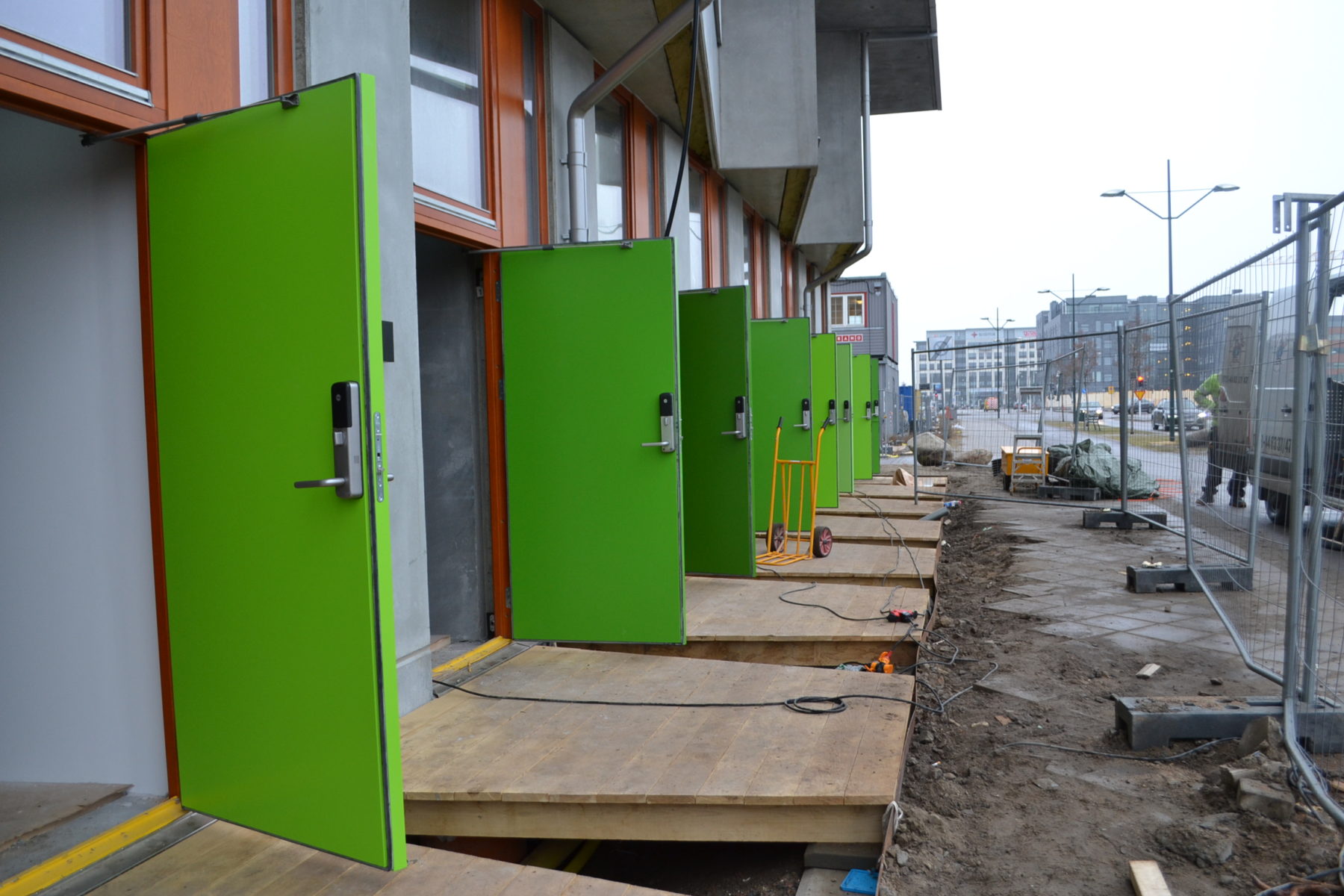 Bedrooms and bathrooms are on the ground floor and a kitchen and living room with work area are located upstairs. Guests have their own entrance with a little garden outside and, during the stay, will have free access to bikes. The reception will be on the ground floor of the building but the idea is that hotel guests will check in on their own. A communal laundry will also be included at the reception.

Many amazing things are happening in Malmö's Western Harbour related to urban cycling. Several property owners are trying to reduce the number of cars and promote cycling, as well as generally making life easier in the area without a car.

None of them, however, have gone to the lengths as Hauschild + Siegel and the Bicycle House Ohboy. This will hopefully be the start of an urban trend where expensive (to build) car parking can be replaced with investment in sustainable living and environmentally-friendly mobility.
Colville-Andersen at 15:24
‹
›
Home
View web version