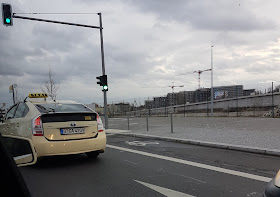 This article is written by Copenhagenize Design Company's former urban planner, Leon Legeland. Originally from the least bicycle friendly city in Germany, Wiesbaden, he has lived, studied and worked in Vienna, Malmö, Copenhagen and currently Berlin. He has a master in Sustainable Urban Management and is recently finished his second masters in Sustainable Cities here in Copenhagen. He now works in Berlin.


Last year we covered the state of cycling in Berlin. It’s time for an update. Berlin has a quite ambitious bicycle strategy and the city administration, on some level, understands that urban cycling improves the quality of life and that it needs to be promoted and supported. As cosmopolitan cities the world over, cycling rates in the last decade have been on the rise. The substandard infrastructure built to date has been partly responsible, but in order to get the 99% on bikes, Berlin will have to turn to best practice infrastructure. Progress is painfully slow and there is little in the way of best practice design. Most importantly, the people of Berlin seem to appreciate the benefits of cycling, cycling rates are rising, and people are demanding more action from the political power through a referendum.


Our blog post from April landed right in the middle of the heated debate around cycling in the German capital. We flattered the group around the cycling referendum and we annoyed the senate with provocations about their actions making Berlin a more bicycle friendly city. Revisiting Berlin nearly a year later, we take a look at the current state of bicycle planning in Berlin.


Thanks to the political pressure and activism of the cycling referendum group Volksentscheid Fahrrad [link], urban cycling became a key issue during the 2016 election campaigns. Consequently, the political powers had to incorporate the claims of the cycling referendum in their political agendas. We have to praise Volksentscheid Fahrrad once again for their activism, dedication and political prowess in bringing urban cycling to the political debate. Their communication and organisation can serve as  an example for bicycle activism the world over.


Volksentscheid Fahrrad’s work is only one sign of progress in Berlin. The newly elected coalition of Social Democrats (SPD), Green Party (Bündnis 90/Die Grünen) and the Socialists (Die Linke) agreed in their coalition treaty on the implementation of a mobility mandate by Spring 2017. This mobility mandate is poised to be the most progressive mobility concept in entire Germany and it certainly has some promising goals and objectives. First, the cycling mandate, proposed in Volksentscheid Fahrrad’s referendum, forms the fundamental basis for the future of mobility planning in Berlin, calling for a sensible redistribution of road space in favour of bicycles through dedicated infrastructure.

As if that weren't enough, the city agreed on another prestige project to show their change in traffic planning paradigm. As of 2019, private cars will be banned from Berlin's 60 metre wide boulevard, Unter den Linden, as it’s transformed into a large space for flaneurs and cyclists. The only vehicles to be are allowed are buses, taxis and diplomatic cars. It's open for discussion whether Unter den Linden is the right choice for a pedestrian friendly transformation and it remains to be seen how the space will be designed and used or what effects it'll have on the surrounding streets, but the symbolic significance is without a doubt. And beyond an improved pedestrian realm in the centre, the extension of the Autobahn 100 will be stopped at Treptower Park, cancelling the previously proposed addition under the river Spree. The insanity of a ring road Autobahn is on ice. Let’s hope it dies there.


Beginning in 2018, this ambitious mandate will be financed with an annual investment of €51 million, or, €15 per person, per year. It’s worth noting that the current annual budget per person on bicycle infrastructure is €3.5. At this level of financial support, Berlin will finally rival other European like Paris or Madrid and their investments in bicycle infrastructure. The difference is that with an existing widespread acceptance and appreciation of the bicycle and a high bicycle modals share of 18%, Berlin has an advantage. This acceptance coupled with the forthcoming funding will surely make results..


All this sounds fantastic and we're wondering if it's just a lot of hot air to please the voters in the beginning of the electoral period. Can the City realise all their proposed plans and actions? If you look at the bicycle strategy from 2012 it is full of ambitious plans and states similar goals as the new mobility mandate. However, with these new goals being legally binding, the likelihood of achieving these new goals is greatly improved.


Nevertheless, Volksentscheid Fahrrad are a little reserved with their enthusiasm about the new mobility mandate. They see it as a huge step forward, but they will continue fighting for even tighter commitment to cycling. We were lucky to meet the two group members Peter Feldkamp and Tim Birkholz for a brief interview. They explained that Volksentscheid Fahrrad’ is missing a measurable quantification of the new mobility mandate. In contrast to their developed Cycling mandate, the mobility mandate does not have a clear time plan and assigned obligations. Further the quality and design of the infrastructure is not defined. And as we’ve seen time and time again, reliable infrastructure makes all the difference. 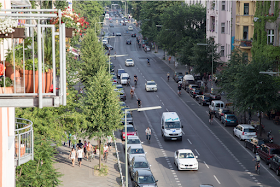 
Berlin, and Germany in general, suffers from a strong lobby for vehicular cycling, meaning these people think that cyclist belong on the road in the flow of cars and in accordance with the principles of riding a car. The dominance of bike lanes separated by mere paint common throughout the country shows this. The best-practice alternative, with a clear, physical separation through a curb, parked cars or some sort of other physical protection still faces criticisms and is rarely realised. Turning to Danish best practice, Volksentscheid Fahrrad has presented a design standard for the construction of bicycle infrastructure in Berlin. In comparison to their developed Cycling law, the mobility mandate by the senate does not have a design standard for the quality of the bicycle infrastructure.Though unfortunately, the bicycle mandate presented by the Berlin senate lacks a design standard, let alone one that prioritizes physically separated, dedicated infrastructure.


Under both the current standards and the proposed mandate, painted bicycle lanes qualify as sufficient infrastructure, no matter the speed limit or traffic flow of the neighbourhoods automobile lanes. And at just 1.5 to 2 metres wide, these painted lanes run between parked cars and moving traffic, far from a comfortable, accessible ride. And from a user experience perspective, cycling in the dooring zone of parked cars makes the lanes feel more much narrower. There’s a time and a place for painted lanes, but they should be reserved for slower, less busy streets.


The influx of painted lanes in Berlin over the past decade gave bicycle riders their needed space, but now it's time to move to the next level, to best practice. The City is currently preparing for a pilot project studying physically separated cycle tracks and test different materials and objects for physical separation. Here’s to hoping this pilot study helps shape a new design standard.


Another remaining issues is the lack of qualified personnel that can take over the task of transforming Berlin into a bicycle friendly city. The current institutions seem completely overstrained with missing and qualified planners to mediate between all relevant actors. An example for the catastrophic situation in the Berlin administration came up this fall. For 13 years now, a bicycle lane along Skalitzer Straße has been shovel-ready, but the involved actors can't get their shit together and roll out the infrastructure. What makes this a true debacle, is we’re talking a simple painted lane.


We know that in some instances we have 18th Century institutions facing 21st Century problems. But we also know that a 18th century invention can solve 21th century problems.
As a reaction to the chaotic planning status, Berlin wants to start a City owned planning institution that has the overview of current bicycle planning and construction activities. Further, a cycling alliance between the ADFC, Volksentscheid Fahrrad, the relevant districts, and the public transit organisation has been formed. However, they still need planners, engineers and designers to get the much needed work done.


The newly approved budget for cycling infrastructure will be in place from 2018 and the newly formed administrations and municipal planning departments are reforming after the elections. It will take some time to get things done, but Berlin is moving towards the right direction! For now we look really optimistic in the future.